WAIDPS is an open source wireless swissknife written in Python and work on Linux environment. This is a multipurpose tools designed for audit (penetration testing) networks, detect wireless intrusion (WEP/WPA/WPS attacks) and also intrusion prevention (stopping station from associating to access point). Apart from these, it will harvest all WiFi information in the surrounding and store in databases. This will be useful when it comes to auditing a network if the access point is ‘MAC filtered’ or ‘hidden SSID’ and there isn’t any existing client at that moment.

WAIDS may be useful to penetration testers, wireless trainers, law enforcement agencies and those who is interested to know more about wireless auditing and protection. The primarily purpose for this script is to detect intrusion. Once wireless detect is found, it display on screen and also log to file on the attack. Additional features are added to current script where previous WIDS does not have are :
·         automatically save the attack packets into a file
·         interactive mode where users are allow to perform many functions
·         allow user to analyse captured packets
·         load previously saved pcap file or any other pcap file to be examine
·         customizing filters
·         customize detection threshold (sensitivity of IDS in detection)

Requirements
No special equipment is required to use this script as long as you have the following :

Note: Application 3 - 8 are already pre-installed in Backtrack and Kali Linux. Save the hassles by running on Kali-Linux.

Download / Installation
Visit https://github.com/SYWorks/waidps for all documentation and files or download the raw file directly from here

Save the file 'waidps.py' to your Linux Desktop or any directory you like. For my case, i saved it on my desktop and enter the following in the terminal console.
- cd Desktop/
- chmod +x waidps.py
- ./waidpy.py

Once installation is completed, you may wish to delete the file where you have initially saved as the following had be created: 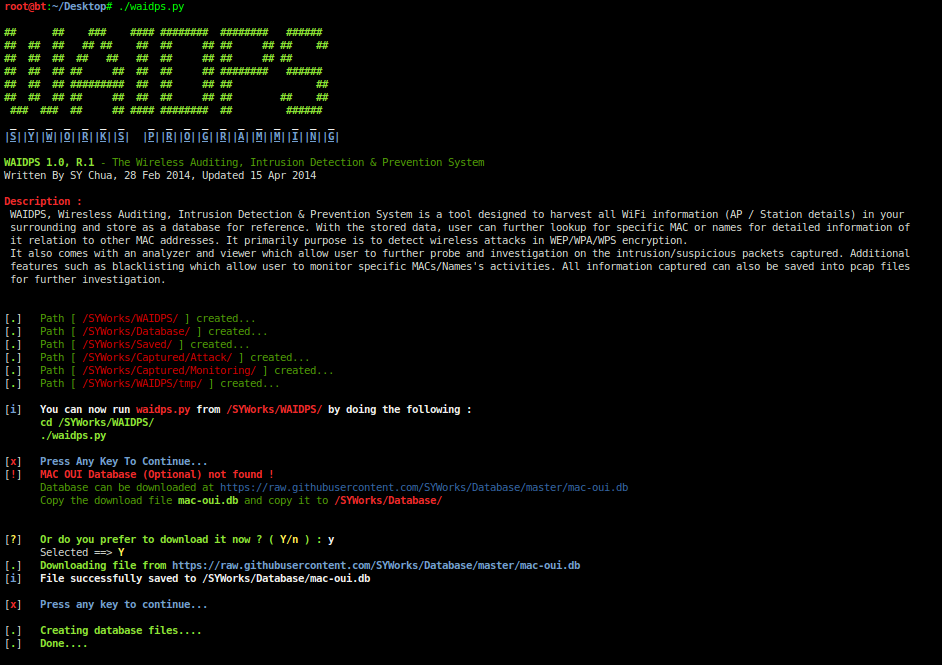 Note :
·         WAIPDS can download the ‘mac-oui.db’ directly from Github as long as there is internet connection
·         User need to enter a password for encryption of important database and remote transmitting/receiving of encrypted data (future) 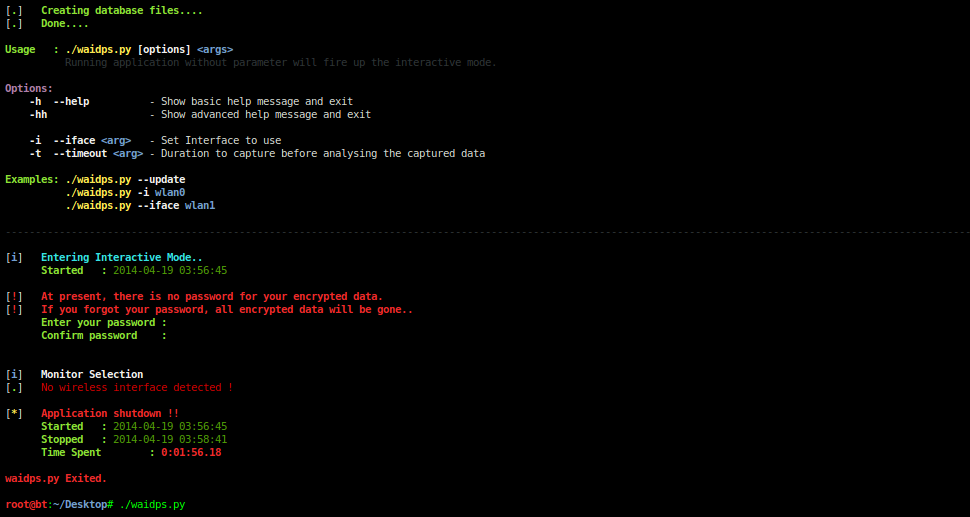 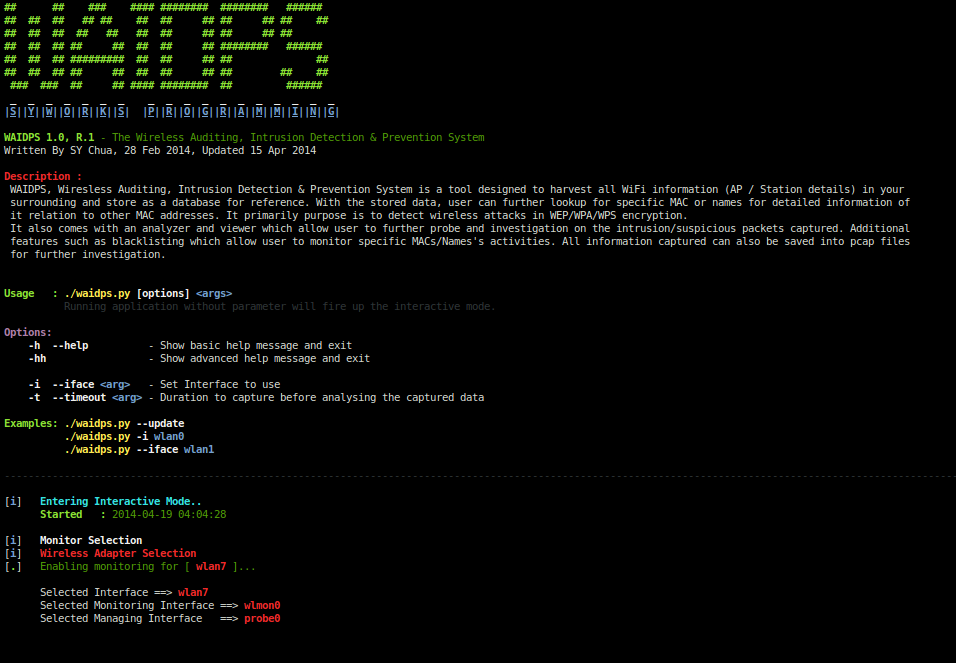 If there are multiple wireless interfaces detected, application will prompt user for action. 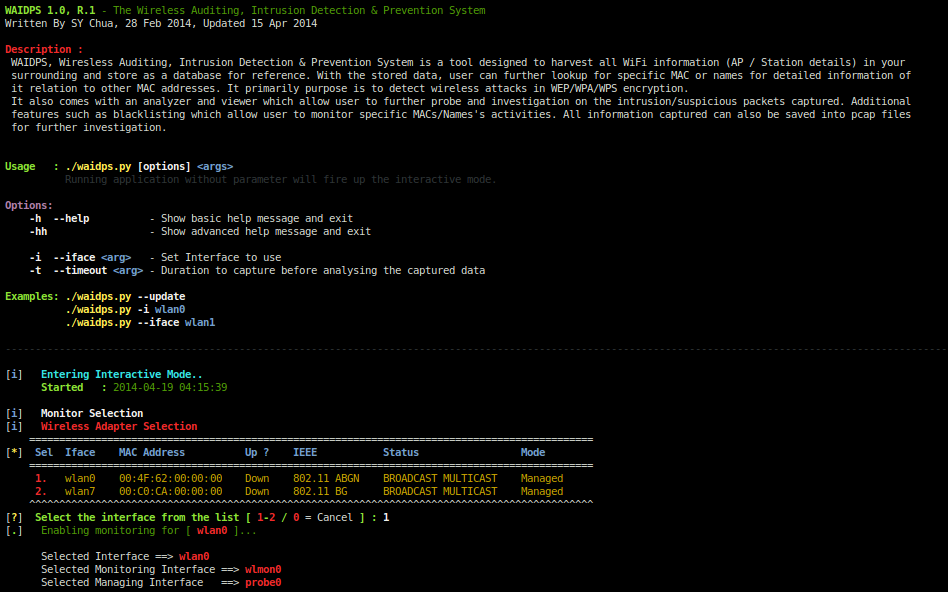 User can also is the commandline parameter ‘-i’ to specify the interface to use. 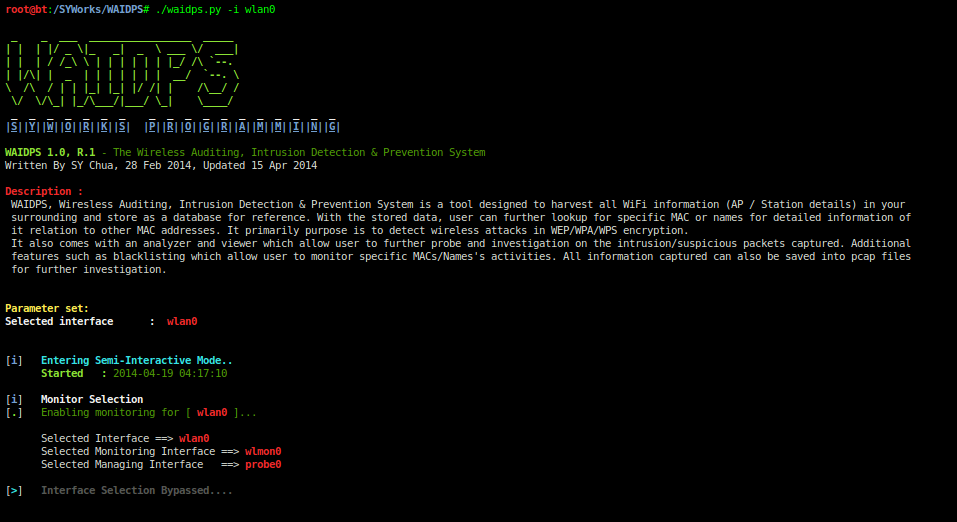 Before starting with the detail description of the whole application, WAIDS display structures are separated in several parts. For better understanding, the structures are as below.

WiFi-Harvesting Module
- Collecting/Storing of Access Points/Stations details and the relationship with each other. [Access Points / Wireless Clients Listing]
- Displaying of unassociated station information and its probe [Unassociated Stations]
- Allowing user to enter MAC addresses / Names to be monitored [Monitoring Panel]
- Association of stations to access point, station switch from one access point to another, station acting as both a wireless client and access point, etc [Association/Connection Alert]

Below is an example of the displaying structure. 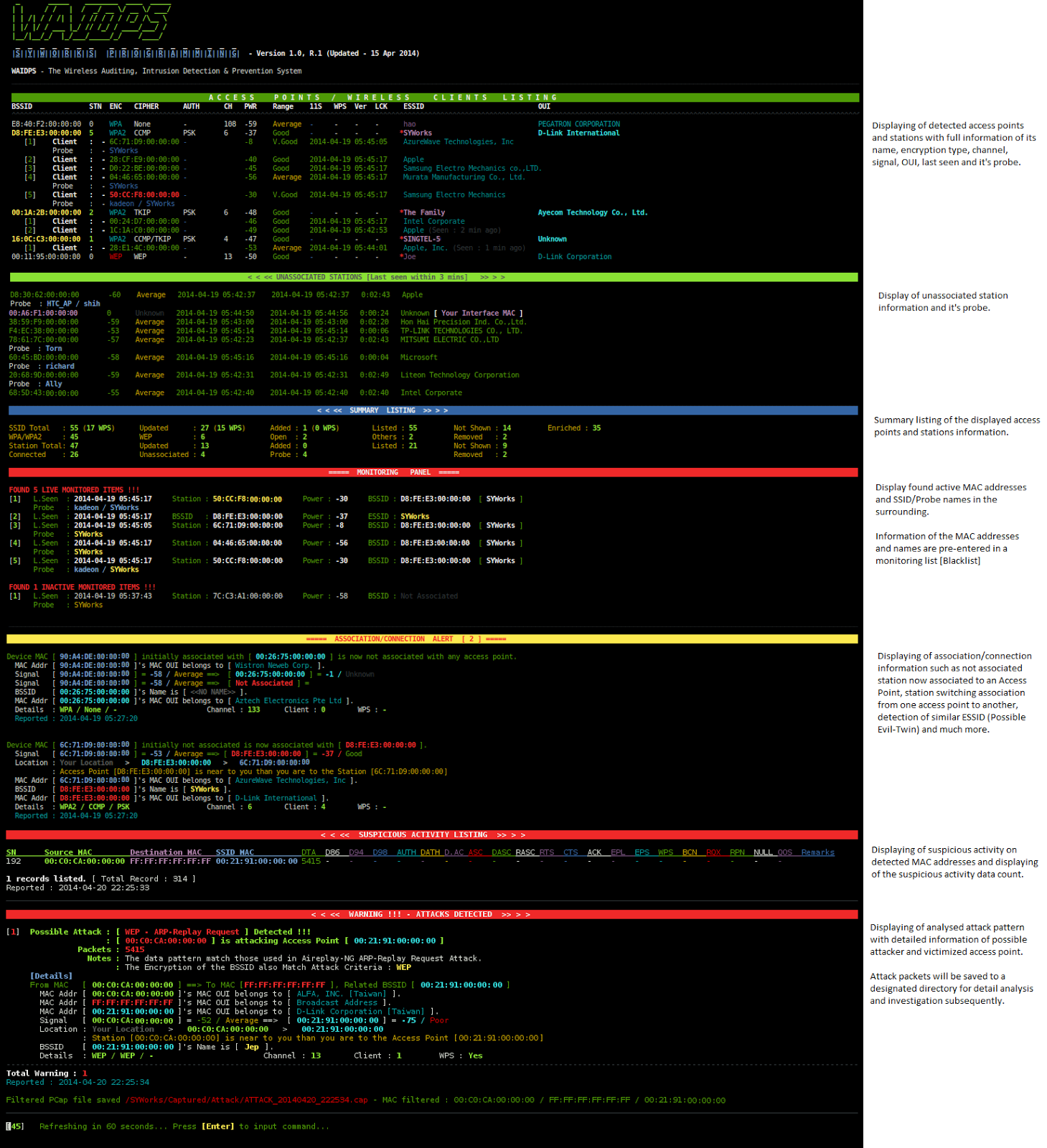 Note : User can also choose to display or hide the some of the selected display.

I – Interactive Mode (Packet Analysis)
·         Go into the command prompt and type [Help] to display options. Tons of options available for advance user examine and analyzing captured packets and add in customized attack pattern themselves if they know how to script.

The WiFi Harvesting module will sniff the surrounding traffic using airodump-ng, iwlist and wash for network information such as station mac address, probe, access point mac, name, encryption type, channel, signal strength, bitrate, oui and WPS information. With all the information gathered, it will then stored in databases for easier lookup of MAC addresses / names which will proof useful in term of MAC filtered / Hidden SSID access point or as an evidence that a specific station have associated to which access point. It can be done by using the built-in Lookup function.

All these setting can be changed by press [Enter] to interrupt and entering user option menu while application is scanning the environment. After entering into the [Command Selection Menu], select “D” for output display and enter the choice from 0 to 5 to switch between views.

Option 4 - [Access Point with Station (All in one)]
The default display view will be Option 4, ie. displaying both Access Point/Clients/Probes all together. It is consider the best and advanced view among the 5 display options. 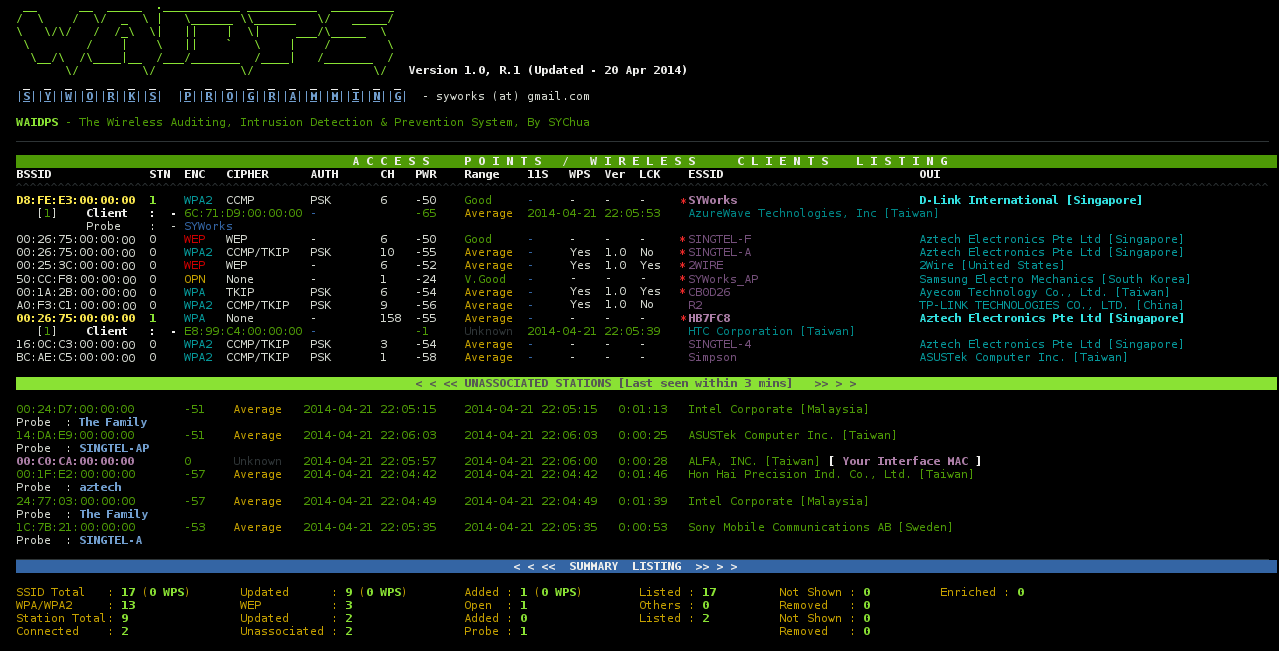 Note : A bold yellow on BSSID indicate that there are stations associated to the Access Point.
A red asterisk beside the ESSID means that the Access Point was enriched with IWList.
Different encryption type is represent by different color (Open- Yellow, WEP-Red, Cyan-WPA/WPA2)
Station are in green color and probe name are in blue. 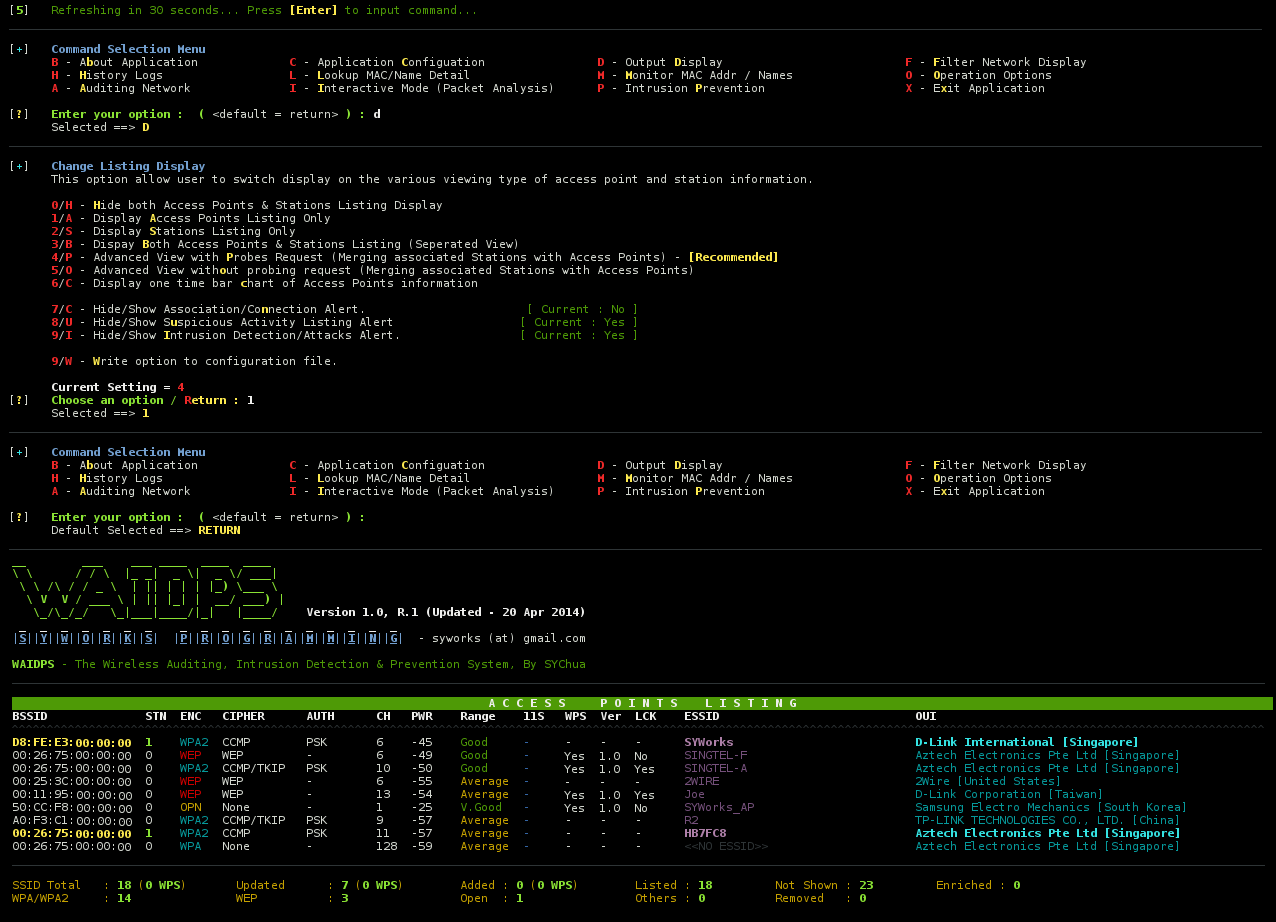 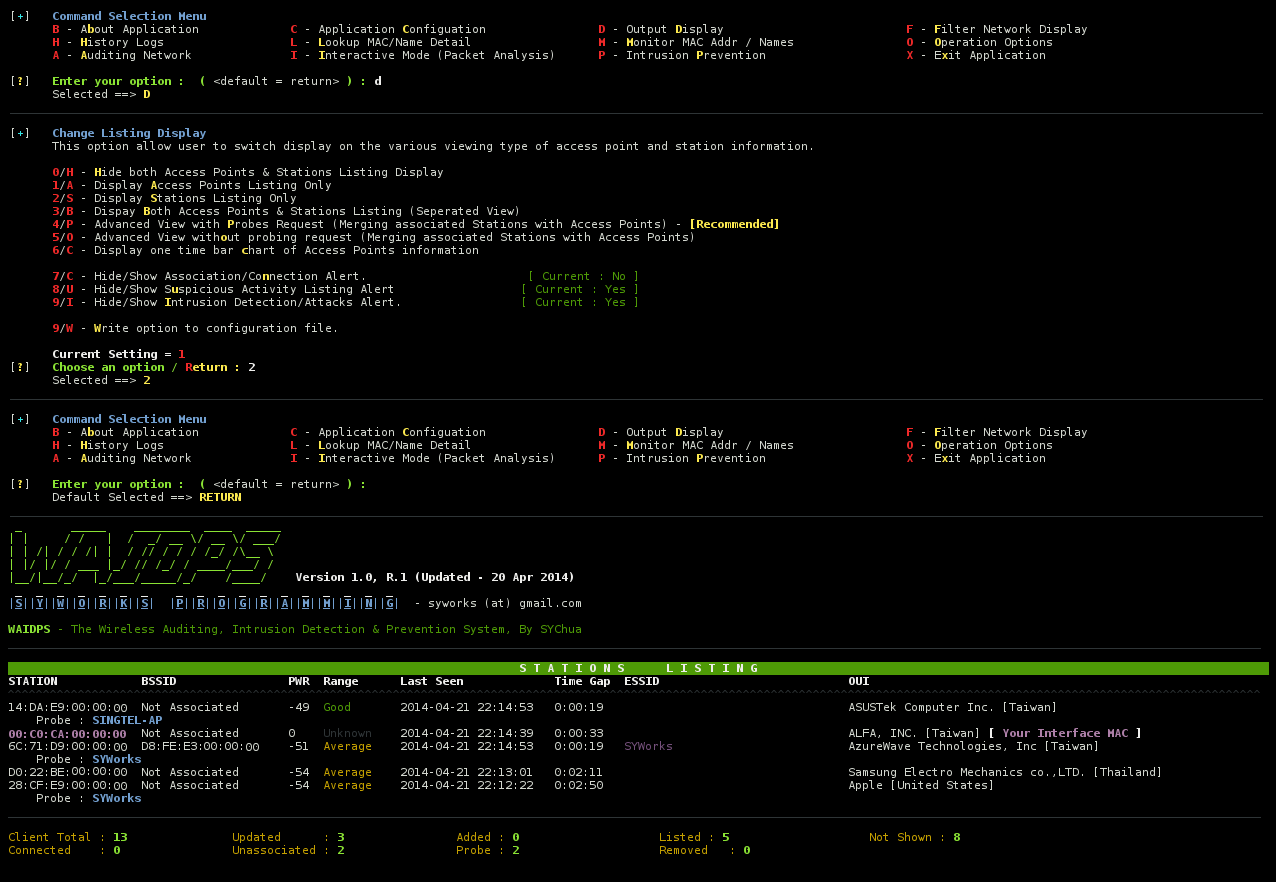 Option 3 – Access Point and Station (Each in separated view)
This option is similar to the Airodump-NG view where Access Points & Stations information are separated into two sections. Basically, this option is the combination of Option 1 & 2.

Option 5 – Display Access Points & Stations information but without displaying of Probe name.
Option 5 is similar to Option 4 except it will not show the SSID name probed by the station.

Option 6 – Display Barchart of Detected Network Information
User can also use option 6 to display the detected network information in barchart formatting divided into channels, encryption type and signal range as shown below. 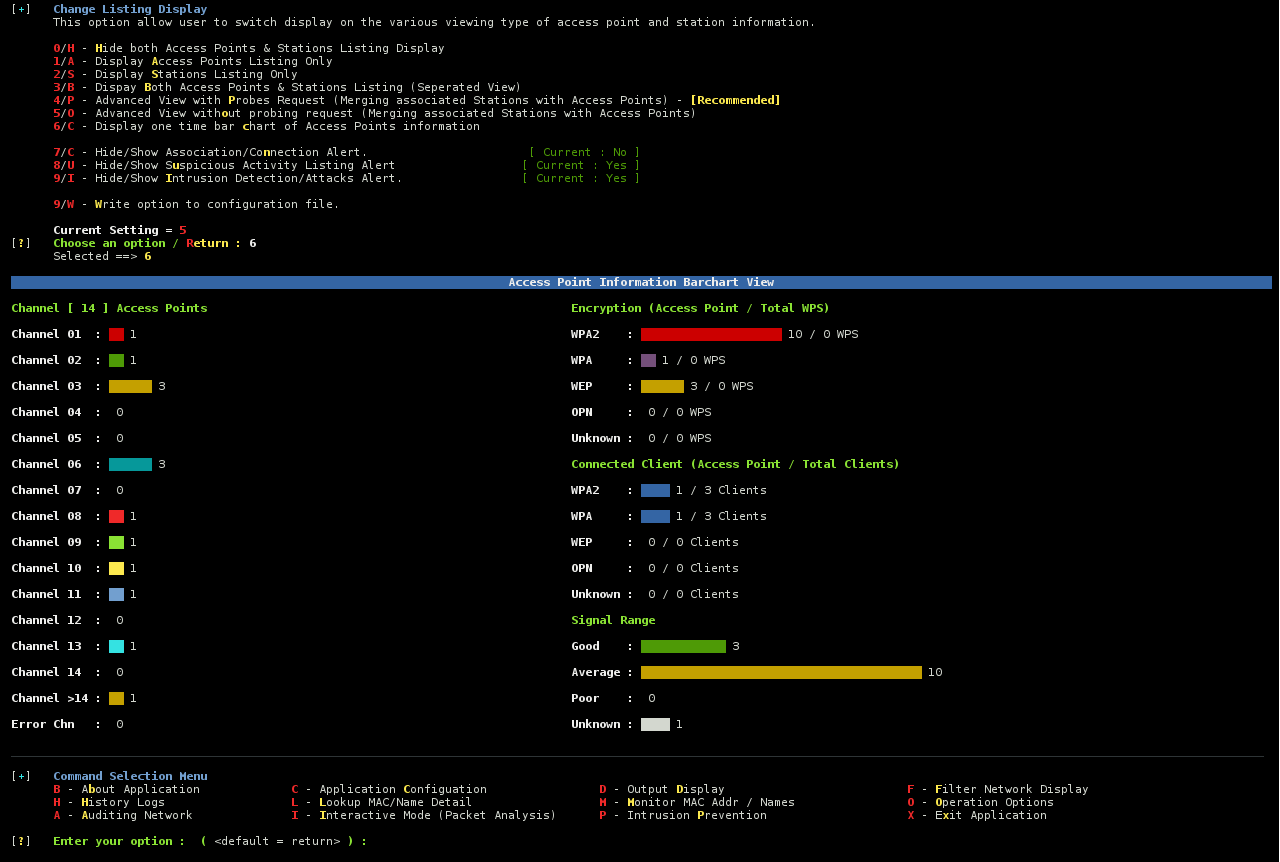 Hiding / Removing of Inactive Access Points / Stations
By default, the script will hide those inactive access points or stations after in-active for 3 minutes and remove from the active listing after 10 minutes. To the configuration, simply press [Enter] and select ‘C’ for Application Configuration. Within the Application Configuration menu, select on “T” to configure the inactive duration before hiding the Access Point/Station. Continue with “H” to set the waiting time before hiding the AP/Station or press “R” to set the waiting time before removing it from the list. 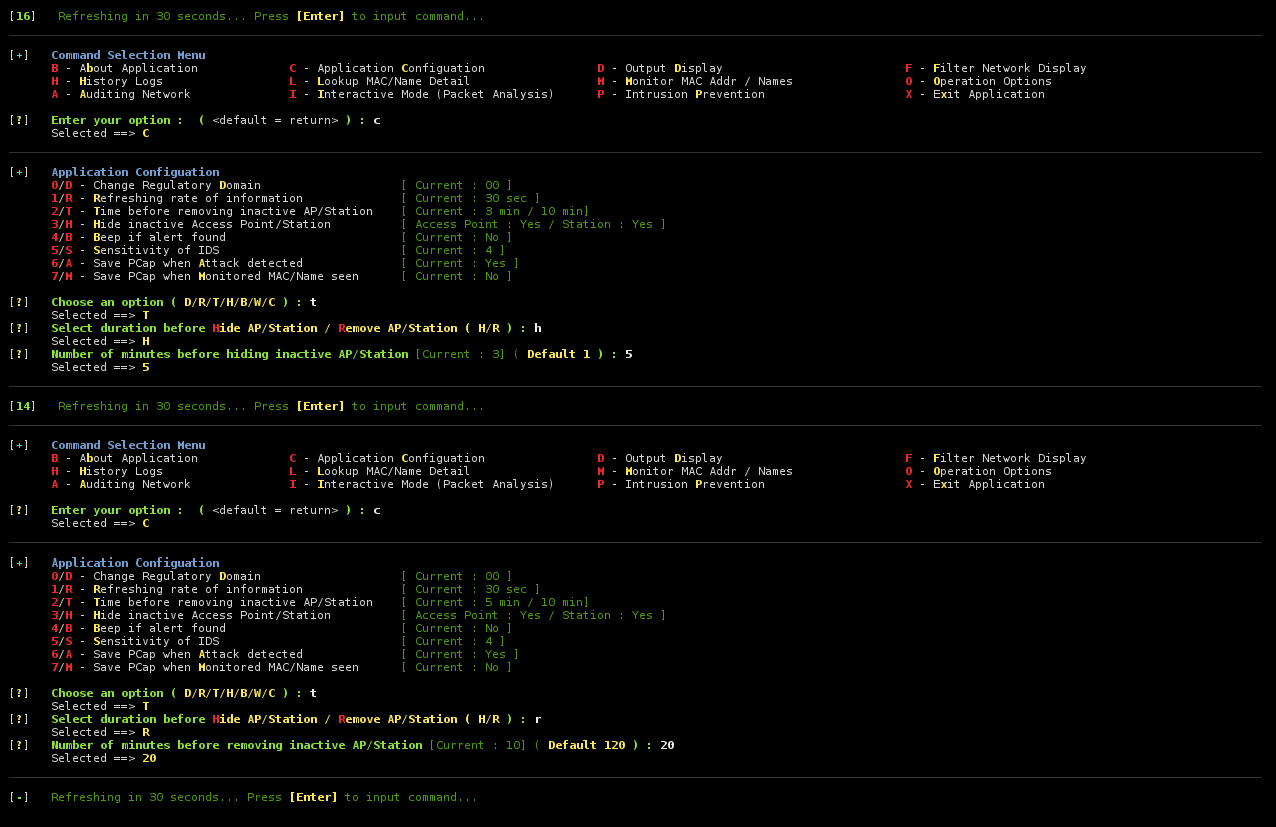 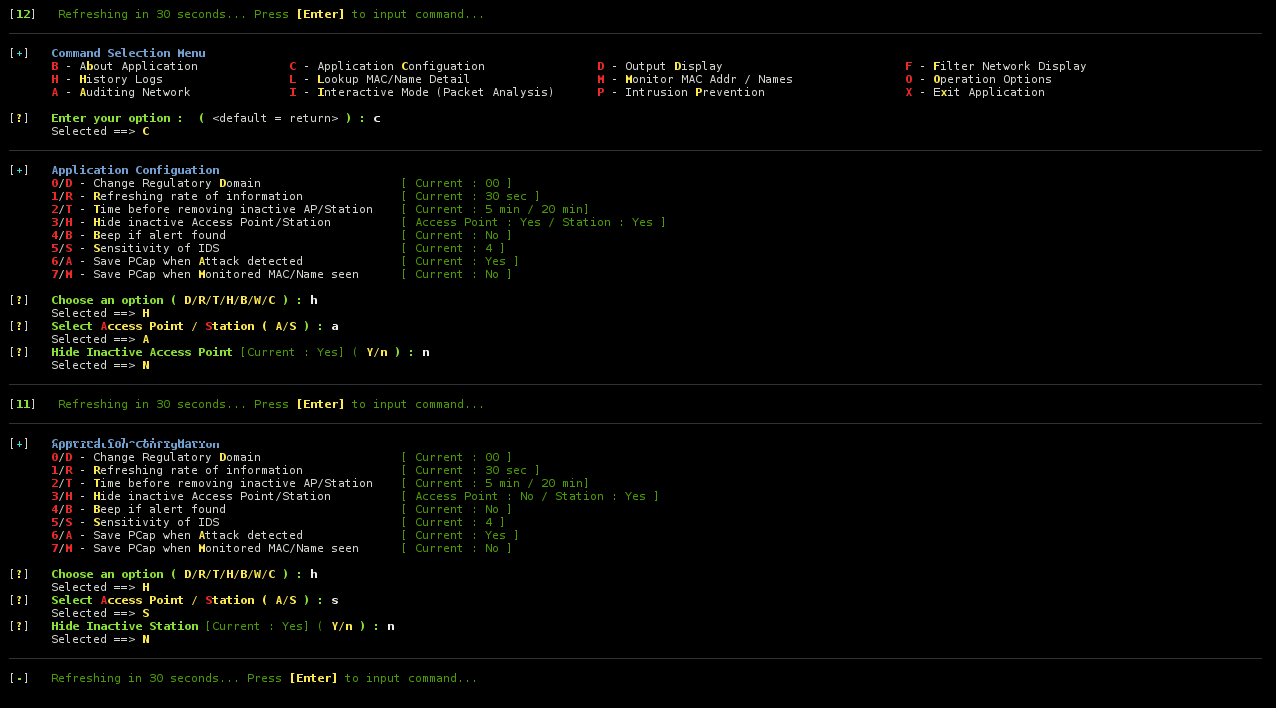 Similar to view like option 4, those inactive Access Points and Stations will be  grey-out and reflected the list seen time and duration it was last seen. 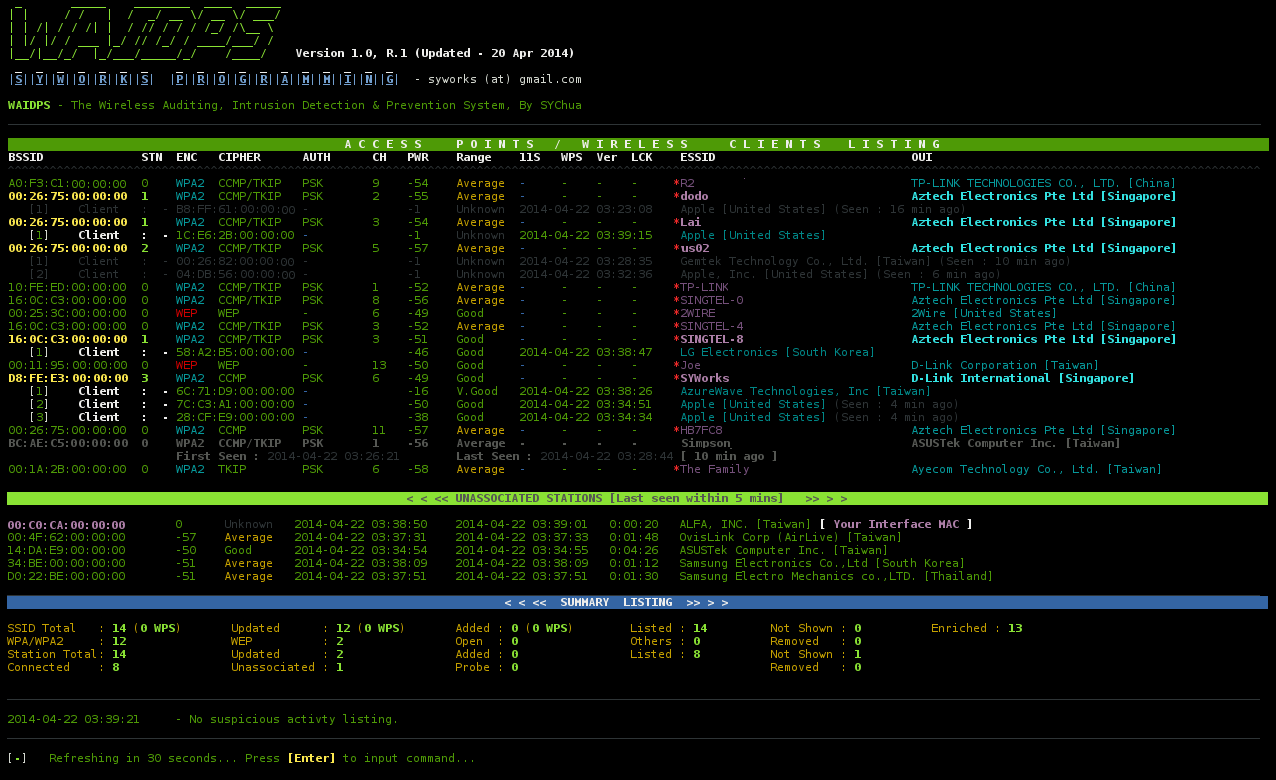 To disable the viewing of this section, select ‘F’ - Filter Network Display on the [Command Selection Menu] and carry on to “S” for Station/Client. In the Station filtering options, select “U” for unassociated station and then enter “N” for no in displaying only if station is not associated. 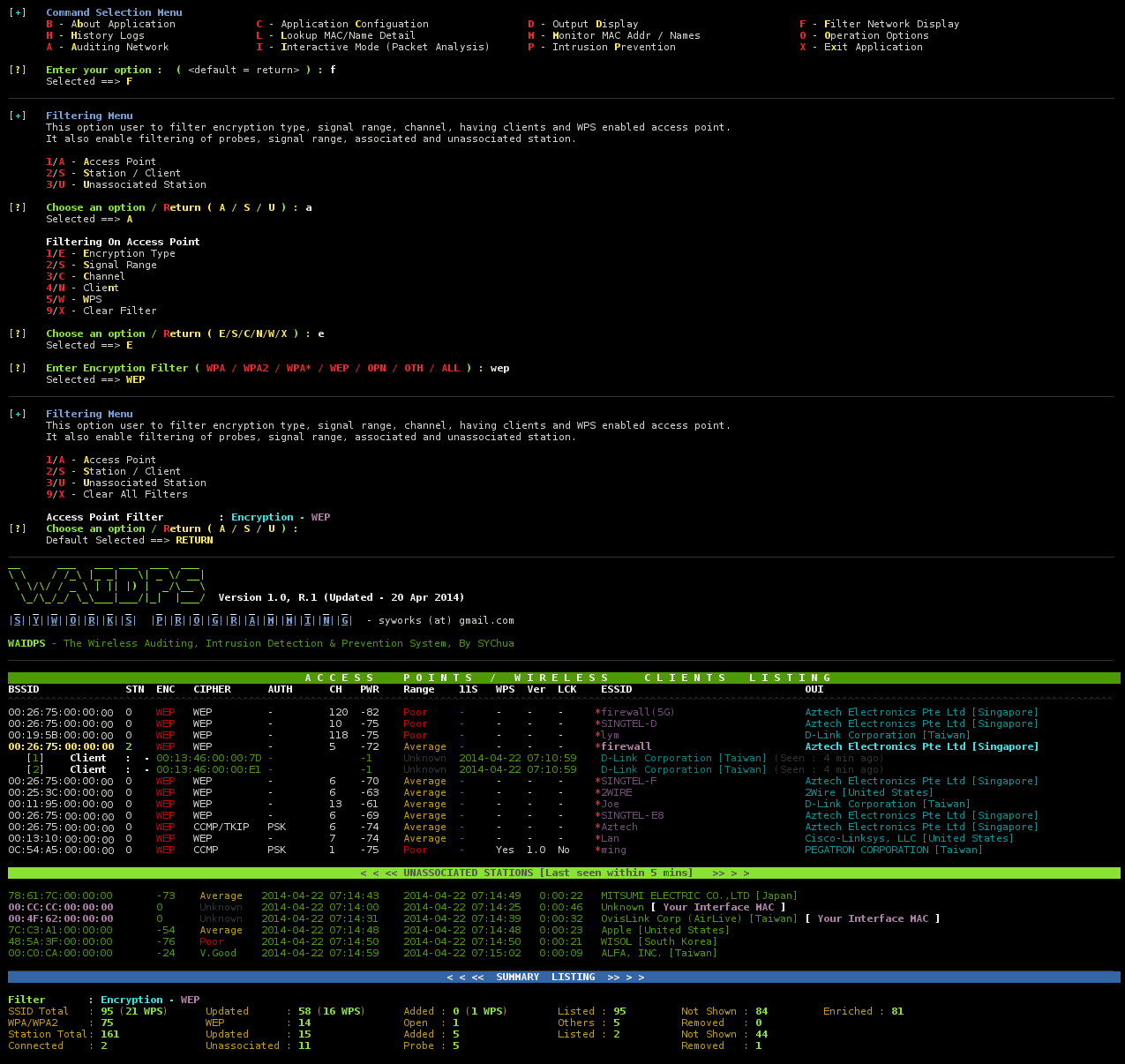 Lookup MAC Address / Names
With the harvesting module run for some time collecting all access points and stations information, user can then lookup on all these information by simply entering the MAC address or name wanted to lookup for. To lookup for a specific MAC address, simply select “L” on the [Command Selection Menu] and “M” to input by MAC Address. Enter the MAC address to search and application will return with a comprehensive detail of the specified MAC address as shown below. 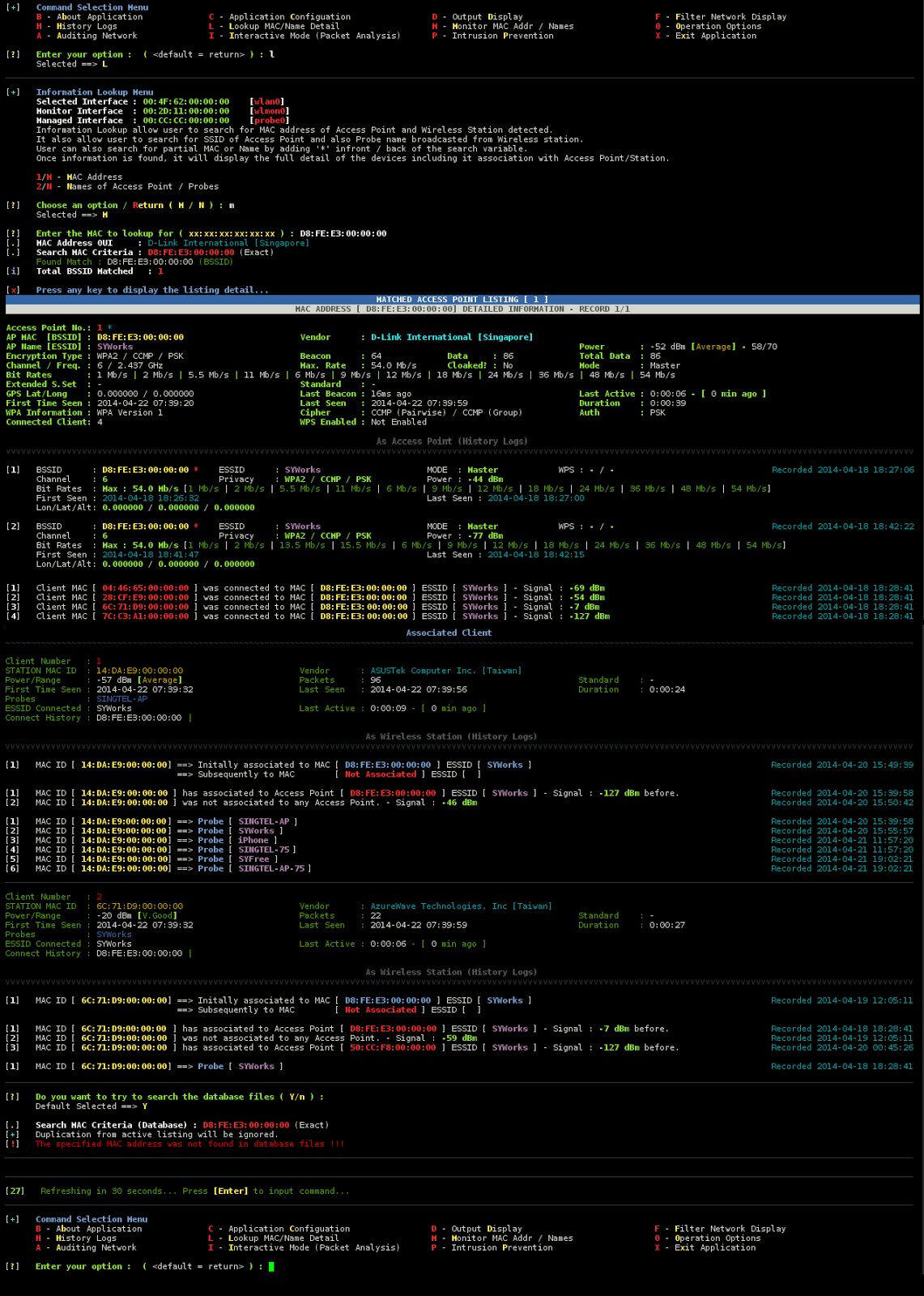 The Lookup function also allow user to perform wildcard search by entering “*” infront/back. Below is example of wildcard name search. 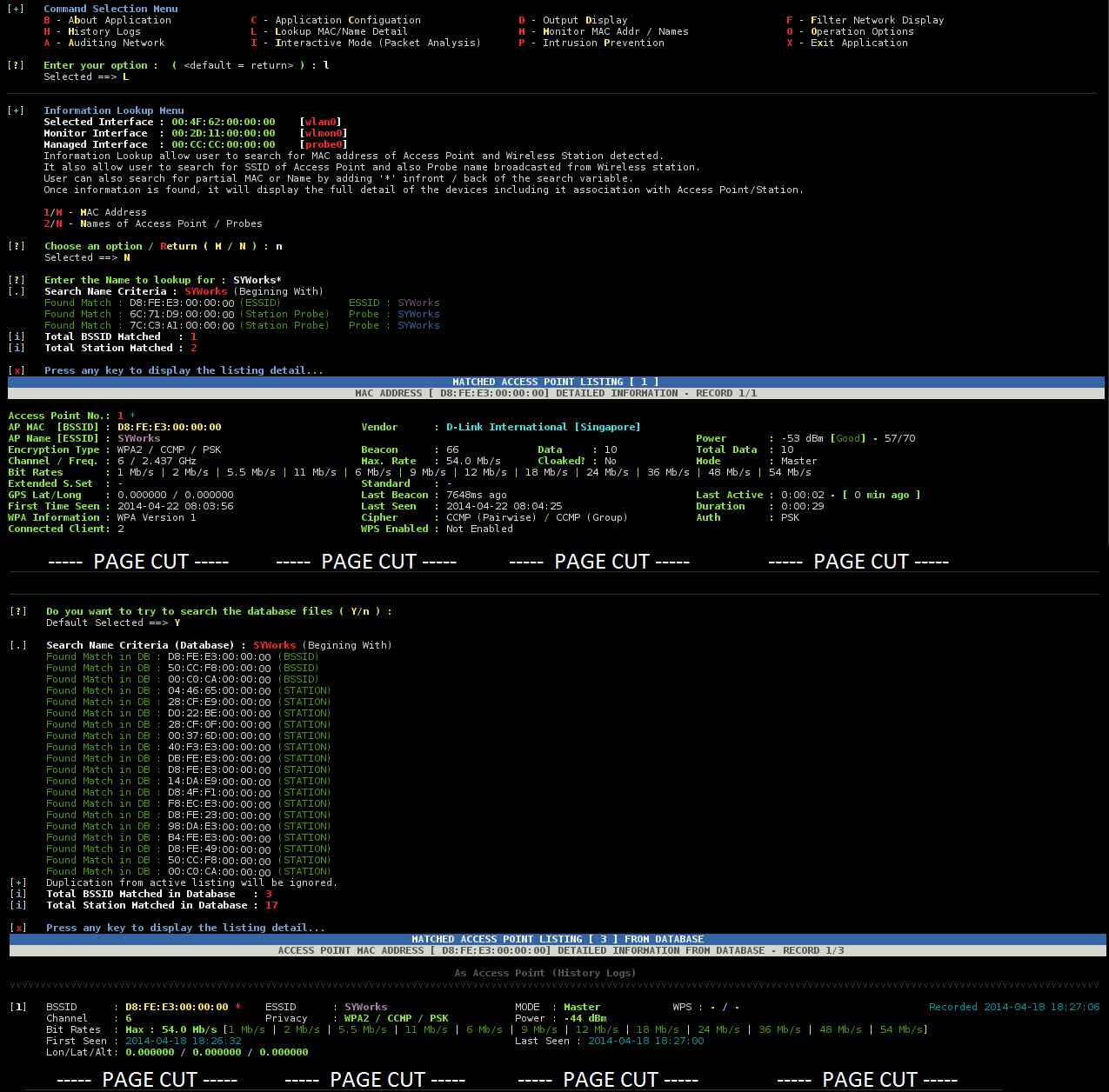 Monitoring Of MAC Addresses / Names (Blacklist)
The application also allow user to input MAC addresses or names to be monitored. This would be particularly useful if user has established the specific MAC address to be attacker MAC address. Once the MAC address / name is found in the surrounding, it will display on screen with alert beep. To add new MAC address, enter ‘M” in the [Command Selection Menu] and then “M” for MAC address. Enter “A” to add and follows with the MAC address. For easier viewing, once the monitored MAC is associated to any access point, it will be highlighted in red on the Access Point / Client Listing. 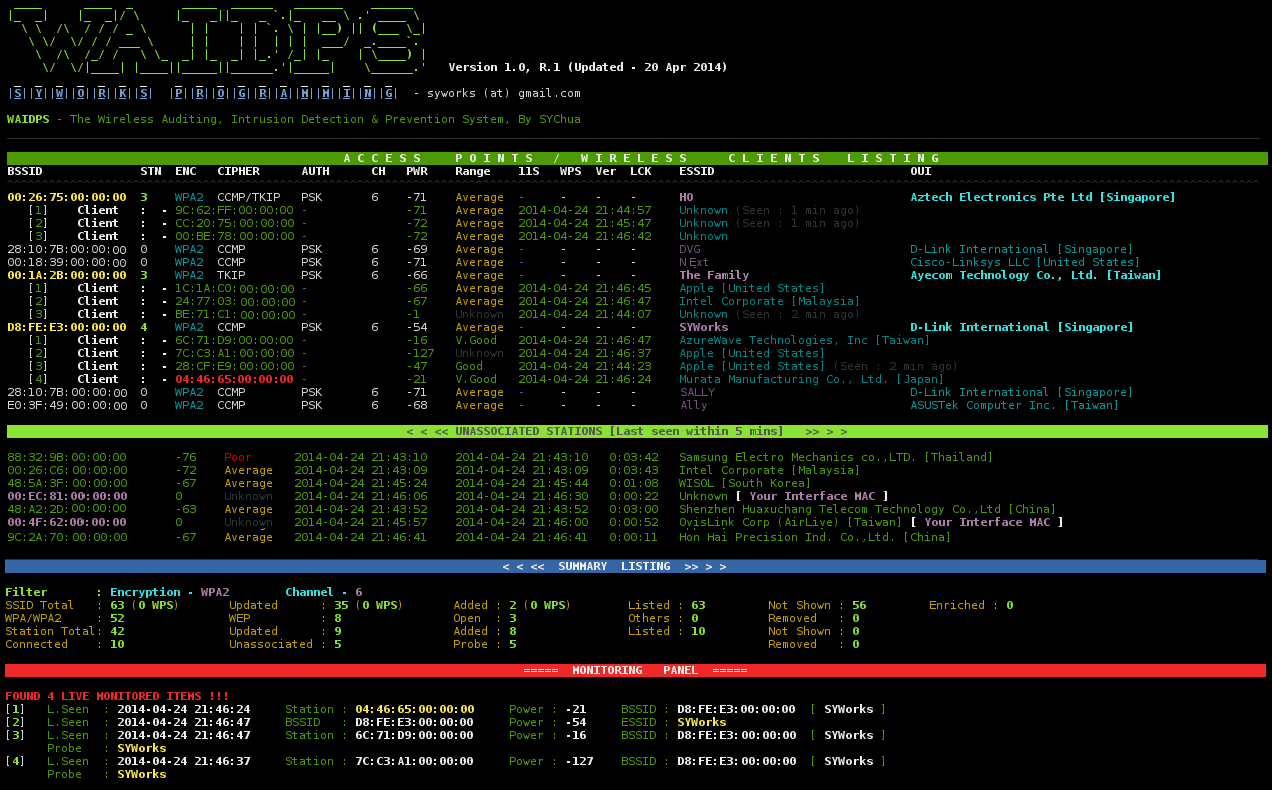 Very well documented. An amazing tool indeed. I hope future/continuous develop persists and that you come forth with more amazing ideas/thoughts to this wonderful project.

thx for your script...your script give inspiration for me..

hello! i got this error after handshake catch

I tried waidps.py and get a message about MDK flood attack. I reviewed macs - almost all were mine but 2 aren't. I found them as another AP with another ESSID.
How it can be?
Is it waidps error or my neighbor uses my SSID too?

can't start waidps. usr/bin/python^M: bad interpreter: no such file or directory.
does someone can help me?

Thank you for this excellent post. I have just started to read this article carefully. Keep up posting these type of post contuniously.
Leak Detection Switch

Nice article on Wireless auditing and protection. Thanks For Sharing this post. Keep Posting.

Our water level controllers in chennai, Chennai form here we are supplying all of Coimbatore, Madurai, Trichy, Tirunelveli, and Tamil Nadu as well as all over India. Our branch offices are OMR, Velachery, Anna Nagar